My photographic journeys sometimes takes me through a local horse stable where I am greeted by the owner – we’ll call him Buck - with a big smile and firm hand shake.  I would describe Buck as a hard working friendly cowboy. He loves horses and animals, loving animals places him close to my heart. I never met an animal I didn’t like, but there are some I highly respect and keep my distance. I will leave it at that.

As I visited with Buck on this particular day, I observed a three legged dog run past us. I asked Buck, “is that your dog?” He said, “no its my sons dog.” “Really”, I said, “what happened to him?” Well Buck said, “that when the dog was young he was full of piss and vinegar like most pups, he got to running really hard in the back yard and his foot got caught in a crack in the ground and it snapped his leg. The vet recommended that they amputate the leg and assured them that he would adapt and be just fine and the vet was right.” This dog had all the spirit in the world and ran with two other dogs, one maybe about the same age and the other a pup. I think I will give the dog an Indian name and call him Three Legs. Three Legs never missed a beat all the time I was there which brings me to the heart of this story. Enter the Buckaroos. 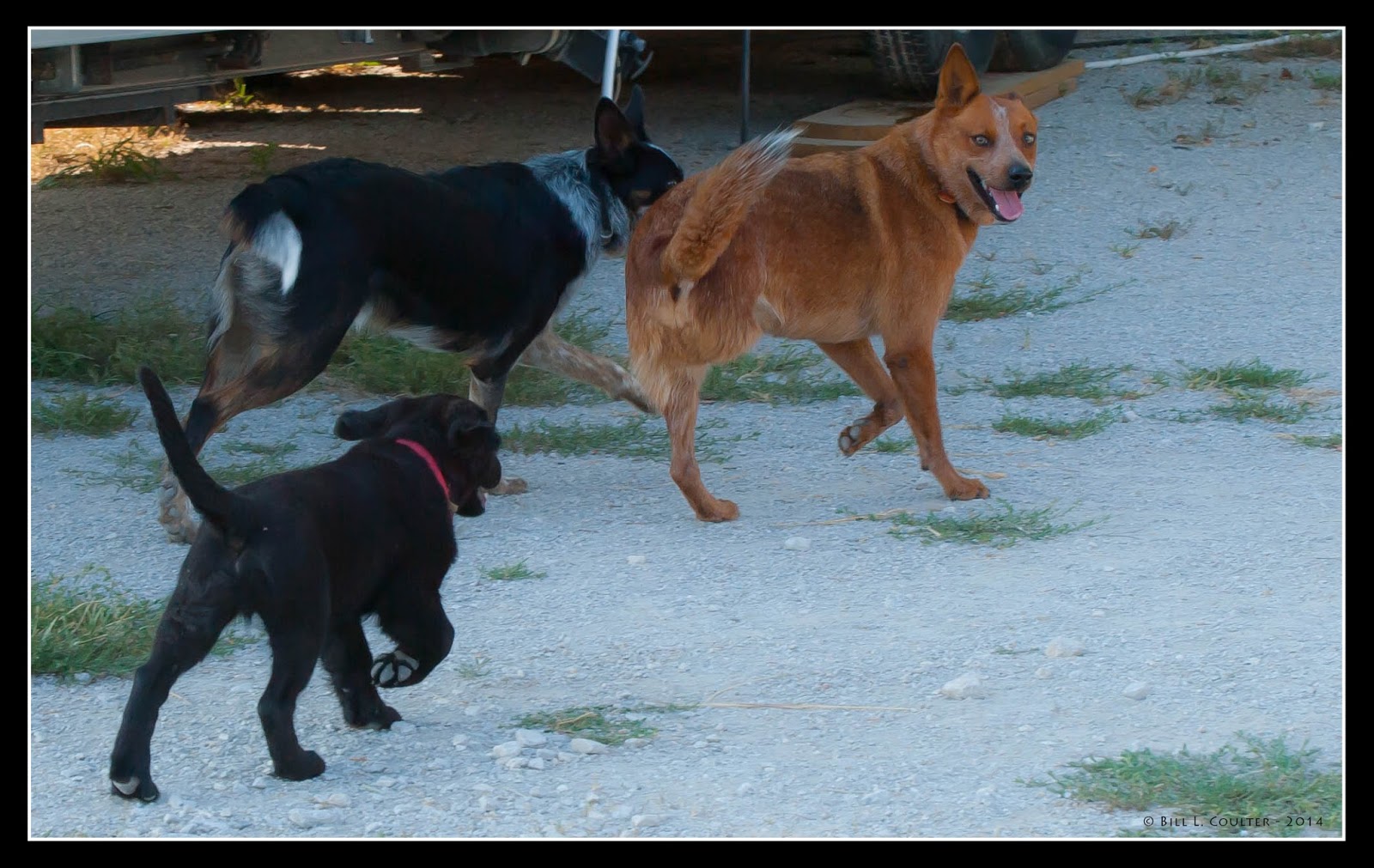 Recently I had the opportunity to photograph a local rodeo at a county fair. For you city slickers a Buckaroo is what cowboys that ride bareback broncos, saddle broncos and bulls prefer to be called. I had arrived early as this was my first attempt at Rodeo photography, and wanted to scope out the best spots for taking photographs.
The rodeo area is comprised of a series of wooden and metal fence corrals that surround a large riding arena. I set up so I could get some photographs of the Buckaroos getting ready for their events. There are no locker rooms, just a space between the starting gates and the corrals like a long hallway with a dirt floor and very little space. There was a set of stairs going up to the announcer’s booth. The Buckaroos carried their gear in duffle bags and tossed them in the dirt and began their preparations for their events.  These guys were used to dirt, believe me. Some were young, some were middle – aged, and all seem to have a lot of grit. Before this rodeo was over, I came to understand where the word grit originated. 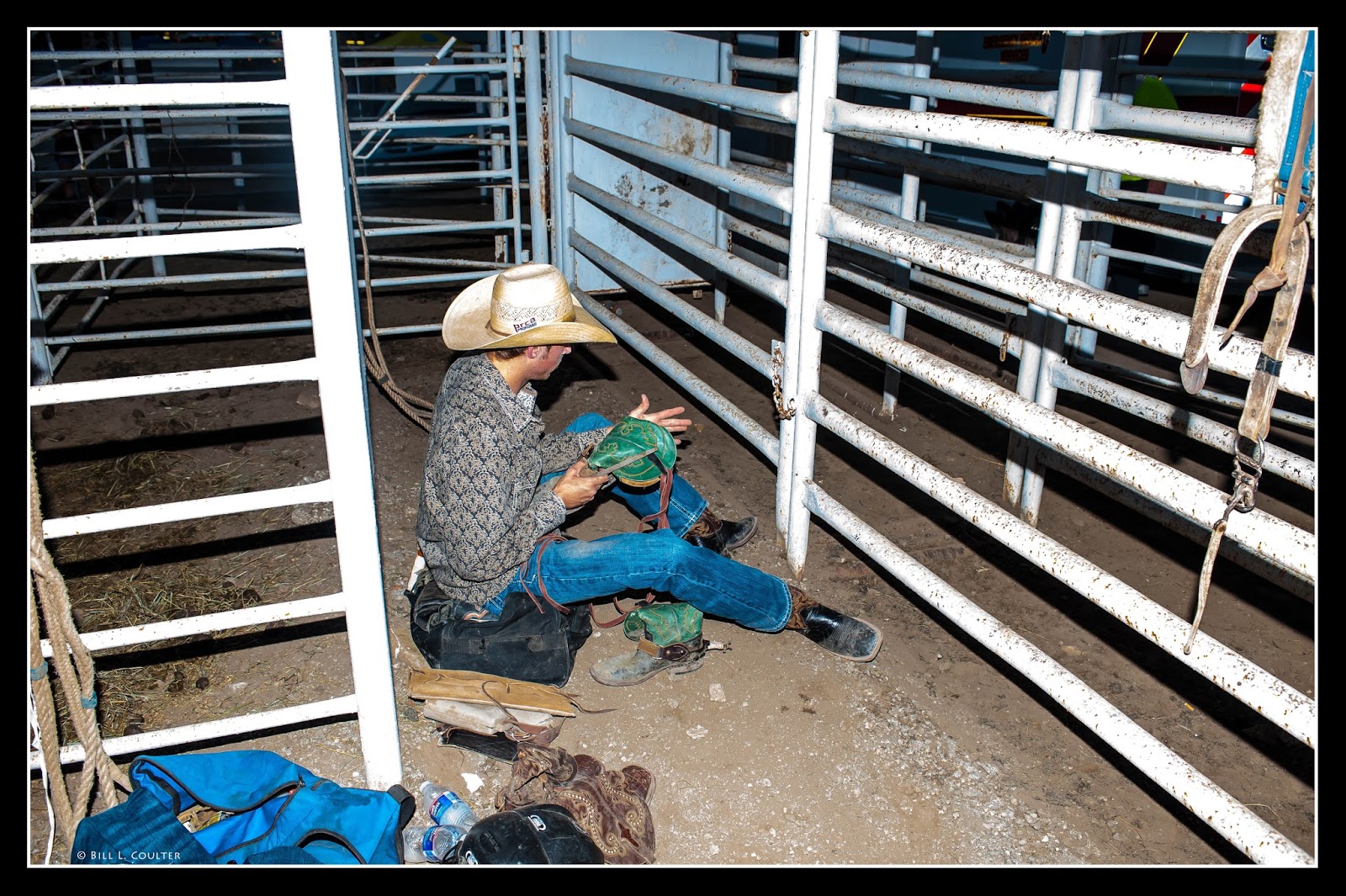 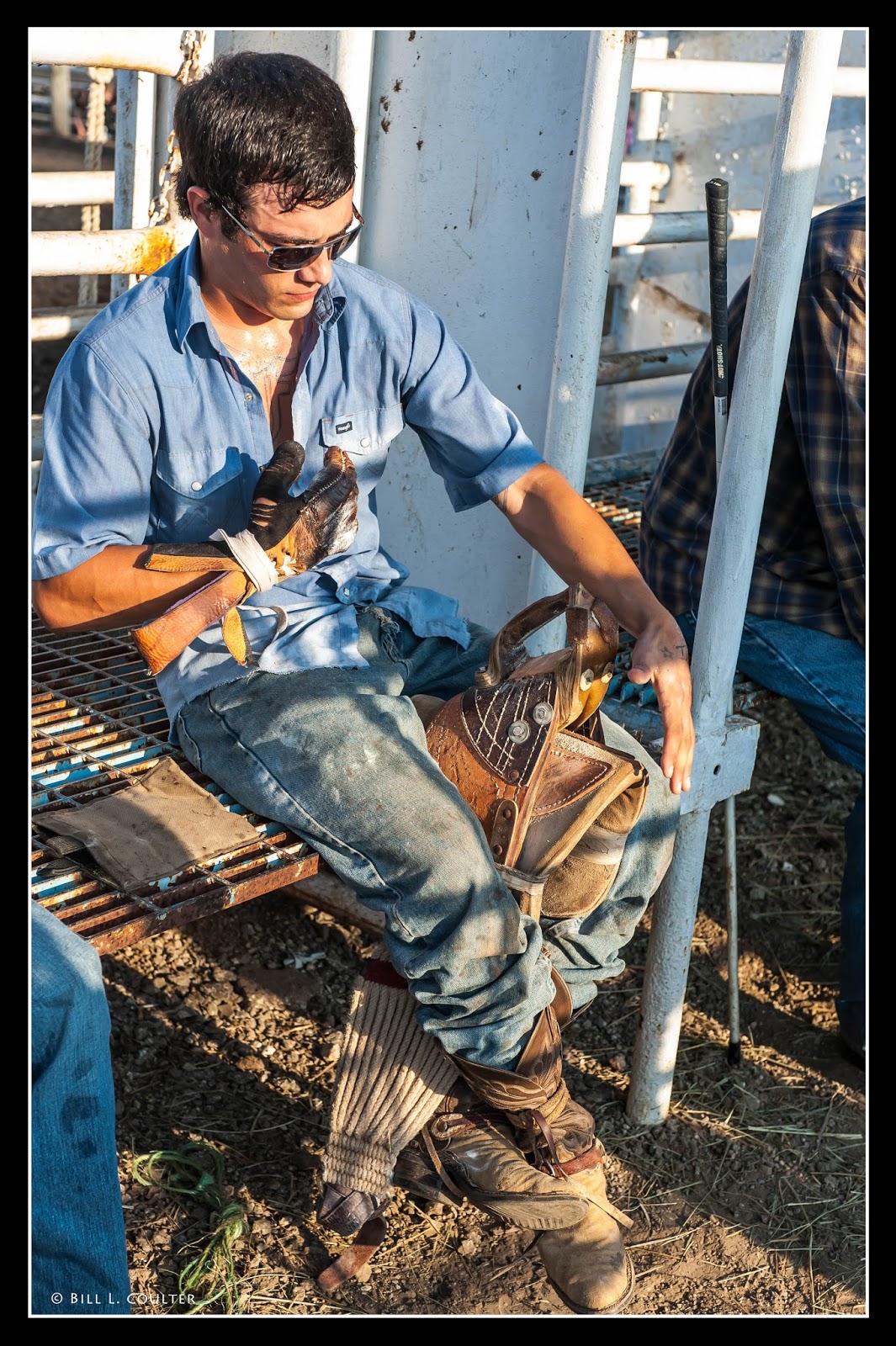 Some were filing on spurs, others were applying rosin to their grips and one had his saddle and stirrups on the ground and was setting in the saddle with his feet in the stirrups out in front of him. He was holding on and going through the motions of what was to come. I guess you might call it getting in the zone but each Buckaroo seems to have their own system of preparation. 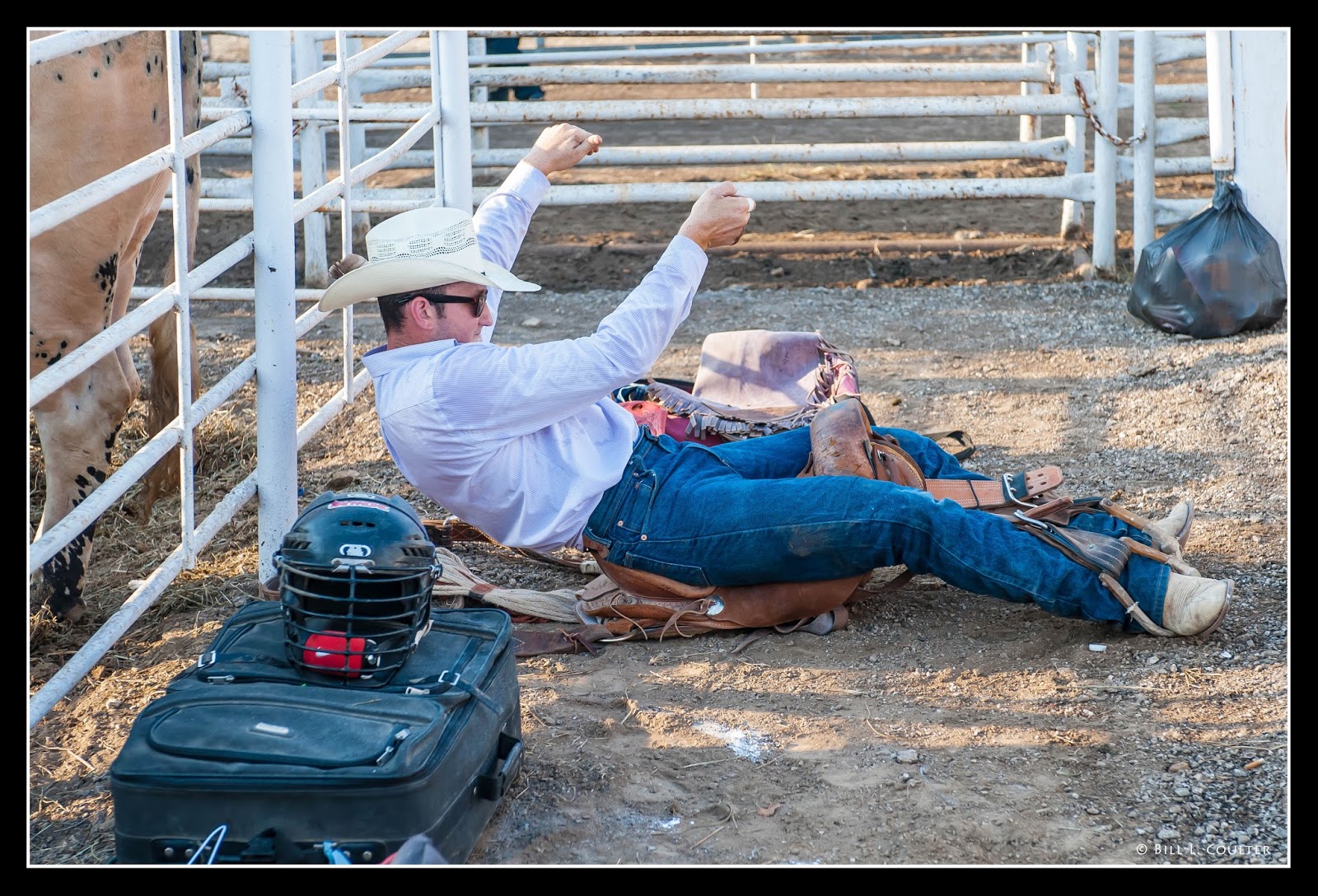 I remember one Buckaroo in particular, hard as a rock, sweat pouring down as he rosined up his glove and grip. Didn’t seem to have a care in the world. He wore
hand - stitched jeans, old jeans, dirty jeans - perhaps the ones worn at the time of his last win, not wanting to change.  I think there is a lot of superstition among the buckaroos.

Just before their event they began to put on their gear. Some were taping on splints, donning flack jackets, and back braces, all to help reduce the pain of old injuries and to prevent new injuries.  All of a sudden it dawned on me what was really happening. The real life and woes of a Buckaroo became apparent. Most seemed to be just getting by, looking for their first win or just a win because the last win was just a distant memory. 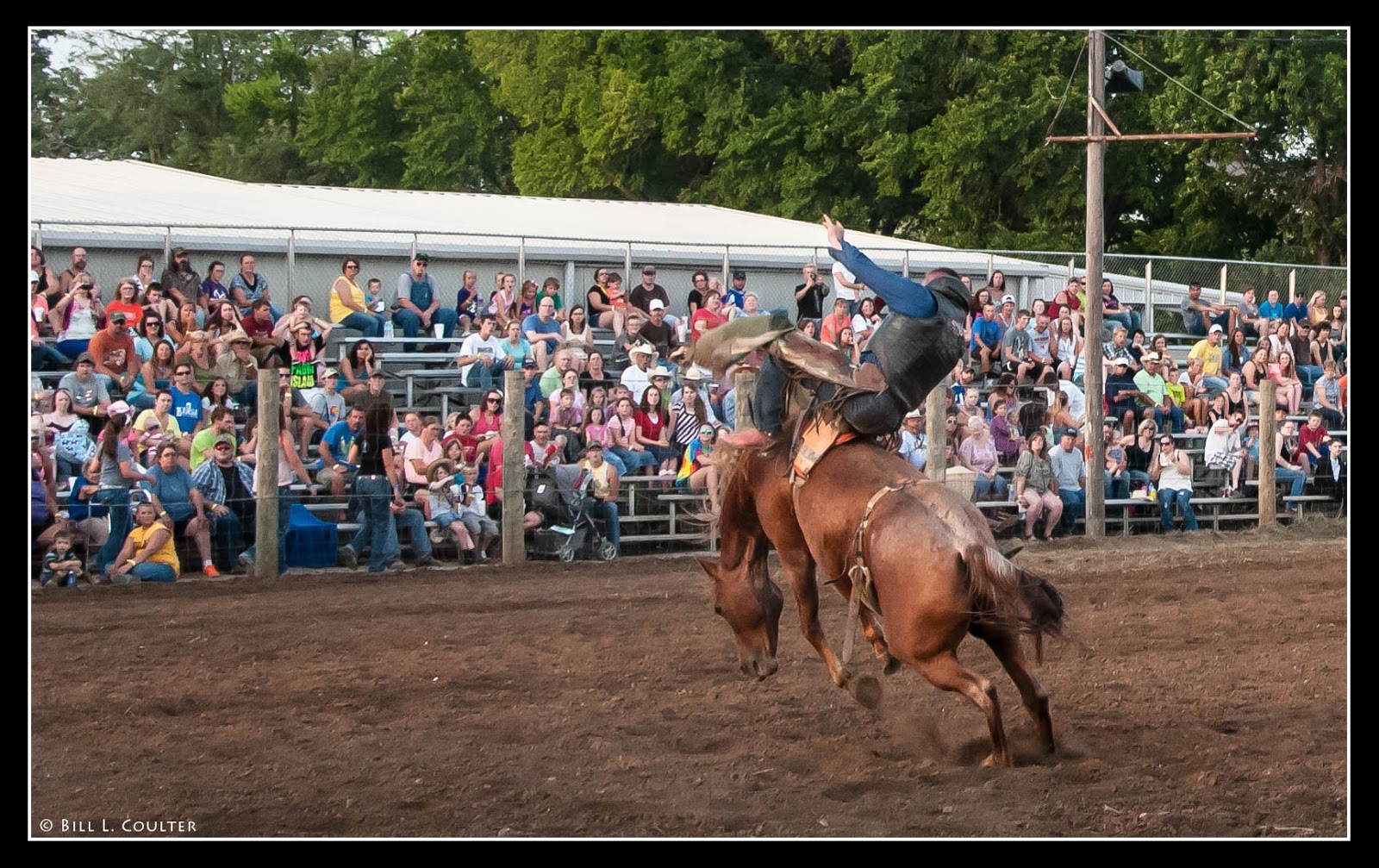 I wondered why someone would put himself through all the pain agony and it came to me.  All the events last for 8 seconds. I am thinking it has become a mind set. The buckaroos think that no matter how many broken bones or how bad the pain is, they can suck it up and do anything for 8 seconds.  Chasing their dream – Let the cowboys ride…………… 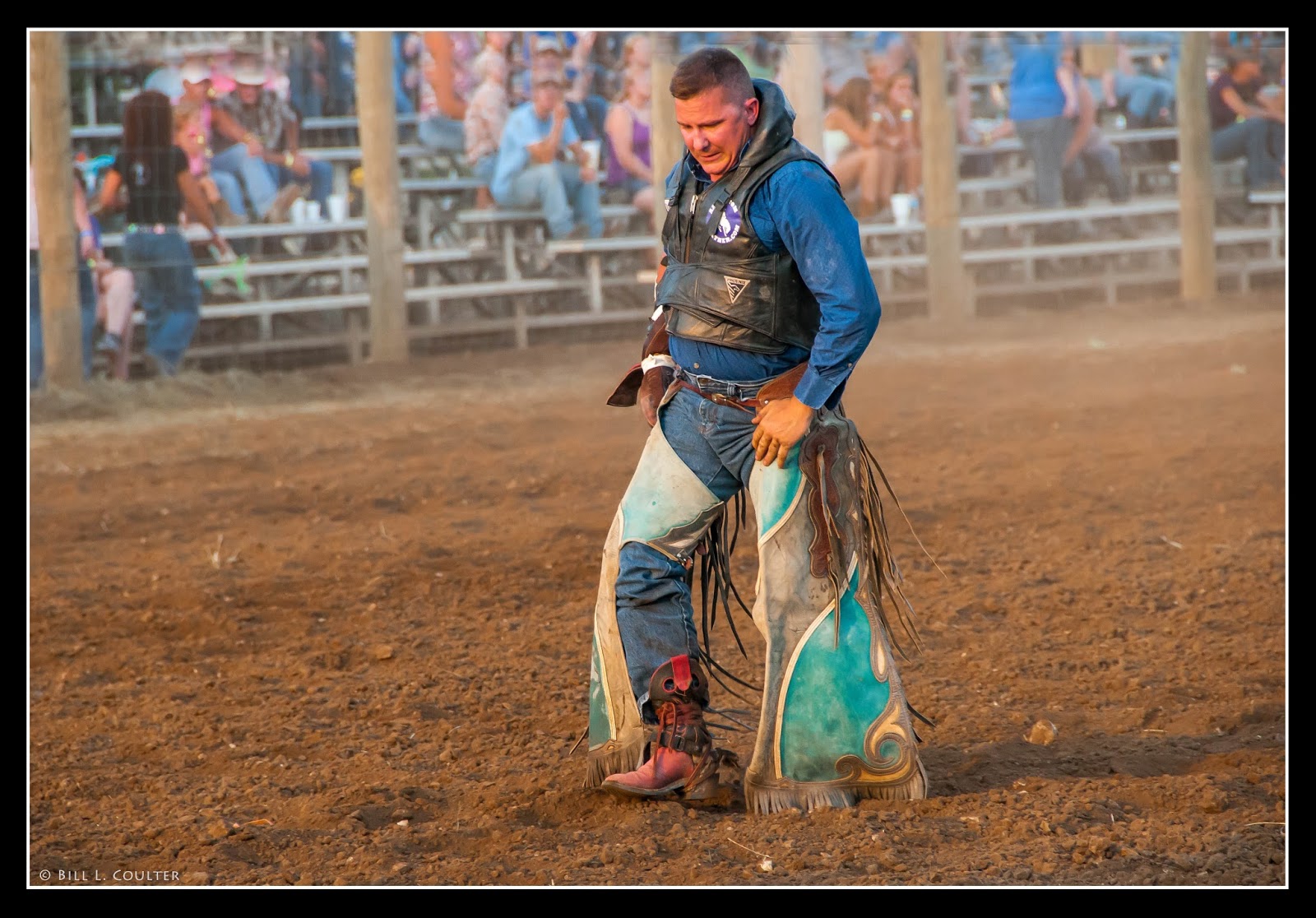 This story is dedicated to all the Buckaroos and to Three Legs of course.